Low Laying Placentas – Associated Pain, Bleeding and Complications
Disclaimer: This website is for informational and entertainment purposes only and should not be taken as medical advice. This site contains paid advertising and affiliate links, from which we may earn a commission when you click (at no cost to you). Read More. 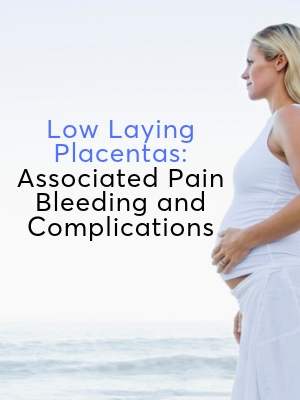 A low lying placenta is not uncommon – but it can cause worries for any pregnant woman. So what is it, will the baby be ok, and can it cause abdominal pain or bleeding?

What is a placenta?

The placenta is a flat, rounded organ that grows on the wall of the uterus during pregnancy. The placenta is connected directly to the mother’s uterine wall and connected to the baby via the umbilical cord.

The placenta serves as a channeling point between mother and baby – exchanging nutrients, blood, waste and gas between the two, so the baby can grow properly during the pregnancy.

Because the placenta takes the place of many of the baby’s vital functions, including breathing, the placenta needs to remain intact throughout the labor and delivery, so that the baby can survive the journey to the outside world.

Once the mother gives birth, the placenta is no longer needed, so it is passed out after the baby, usually fairly painlessly.

What is a low lying placenta, and why is it a problem?

The optimal position for a placenta is at the top of the uterus, on the back wall.

Although placentas will  normally develop in the correct location at the top back of the womb wall, in a small number of pregnancies the placenta grows lower in the womb, or at the front of the womb.

An anterior placenta is usually unlikely to cause problems as long as it’s high up.

When the placenta is at a position within 3cm (approx 1.2 inches) of the cervix, it’s referred to as alow lying placenta.

Unlike placenta previa (where the placenta completely or partially covers the cervical opening), a low lying placenta often moves up on its own.

In fact, in 95% of cases where the mother has a low lying placenta, the placenta will move up into a higher position, leading to a completely normal birth.

However, in 5% of cases, the placenta will either move down or remain in its current position, which can often result in the mother needing to have a cesarean section. The reason for this is because if the placenta is delivered first, the baby will have no life support system or oxygen during the birthing process, meaning they may die during the delivery. The best position for a placenta – Top Posterior (At the top, back of the uterus.)

What will my doctor do if I have a low lying placenta?

Usually a low lying placenta will be identified at either the 12 week dating ultrasound or your 18-20 week checkup ultrasound.

Unless the doctor is extremely worried about the position of the placenta, or you have a high risk pregnancy, the doctor is unlikely to do anything at this stage except book another ultrasound.

Usually the ultrasound will be booked for somewhere between 32-34 weeks, because the womb expands a great deal during the third trimester, meaning the uterus often moves up and out of the danger zone by this stage in the pregnancy.

However, if the placenta is still lying low, or has moved down further, your doctor may book you in for a cesarean section at this stage. If he wants to be doubly sure, he may book another ultrasound for the last few weeks of pregnancy, but if there is no indication of the placenta moving up, the safest way to deliver the baby is via surgery.

Do I have to take any special precautions with a low lying placenta?

This is a common question – and one that varies depending on how low your placenta is lying, your medical history, and your medical carer’s opinion.

If the placenta is 2-3cm from the cervical opening, then usually it’s not considered an extremely big problem. As long as you don’t have any other medical problems or a history of high risk pregnancies, going about your normal activities including sexual intercourse is usually not a problem.

However, if the placenta is lying closer than 2cm to the opening of the cervix, your doctor may ban you from strenuous activities or even put you on bed rest. This is something you really need to discuss with your doctor personally.

Remember – no matter how far away the placenta is, you should contact your doctor or a hospital if you experience any unusual discharge or bleeding.

Can a low lying placenta cause abdominal pain?

In most cases, a low lying placenta will not cause any pain or other sensations that can’t be explained as other pregnancy symptoms. However it may cause some minor spotting.

Abdominal pain in pregnancy is not uncommon and can be due to a number of causes – including normal muscle stretching, baby movement or sciatica.

Of course, if you experience any severe pain, no matter what you think the cause may be, it’s important to either call your doctor or visit the emergency department.